American Prospect‘s Wishful Thinking? ‘The Tea Party Movement Is Over’ 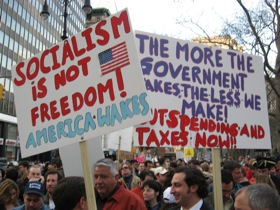 Pack up the picket signs and stop what you’re brewing: the American Prospect has officially declared the Tea Party Movement dead. Correspondent Mark Schmitt has released a shocking piece highlighting the short half-life of right-wing populists movements in America that is sure to put many on the left at ease knowing that the Tea Parties will be done before they know it.
Writes Schmitt:

The most reliable lesson of recent American politics is that movements dependent on that level of heat eventually — or, actually, quite quickly — burn themselves out. The tea-party movement cannot be sustained at the level of anger that’s currently fueling it. It may leave a permanent impact on the Republican Party, giving it some new faces and new language, and most important, allowing the party to divorce itself from the legacy of that squishy moderate, George W. Bush. But regardless of the economic times or the political mood, hot populism of both the left and right varieties has never had a very long run.

Schmitt goes on the explain that, just like the Contract with America movement of 1994 and Cold War-era McCarthyism, so too the Tea Parties will fall out of style. In other words, because similar movements have ended, the Tea Party movement not only will end, but is already in its dying phases. This sort of alternative reality construction isn’t new to liberals (it spawned the television series The West Wing when they could no longer bear the reality of the Clinton era ending), but is horribly misguiding for their cause. The Tea Party movement, for better or worse, is stronger than ever, and, like all movements, of course it will eventually wane. Yet giving as evidence the constant presence of a similar right wing populist movement in America undermines the entire point. Politics is an ebb and flow of power; of course the right has given in on occassion, but so too has the left. It is just as easy to claim that left-wing movements are not sustainable based on the one-term presidency of Jimmy Carter and the monumental congressional triumph that followed for Republicans after Bill Clinton‘s election.

In fact, the right has been more consistent in remaining, if not in power, at least in the spotlight throughout the latter half of the 20th century. Lyndon Johnson’s presidency was followed by Richard Nixon‘s landslide victory and, even after Watergate, the right was able to rebound with a decade of Reagan revolution. The success of Bill Clinton is curbed by the success of Newt Gingrich, and even after eight years of George W. Bush, America has held on to its conservative roots.

While the left accuses radical right-wing publications (often correctly) of hyperbole and fear-mongering, here it has fallen prey to its own wishful thinking. If the Tea Party movement fails, it will be because it falls into incompetent, doodled-on hands— it has not yet reached that point. Try again next time, Prospect.