Dear Conservatives: Democrats Are Not Scared Of Rand, But They’re Terrified Of Christie

Dear Conservatives: Democrats Are Not Scared Of Rand, But They’re Terrified Of Christie 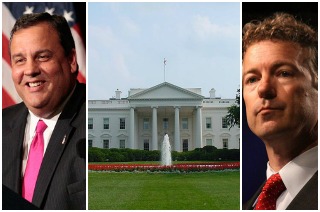 The thoroughly entertaining back and forth that erupted this week between New Jersey Gov. Chris Christie and Sen. Rand Paul (R-KY) has captured the media’s attention and focused the political mind on 2016 like nothing has since the night President Barack Obama won reelection. It is hard not to view the two GOP officeholders’ heated war of words in the media through the prism of the Republican presidential primaries.

Many conservatives have become so disillusioned with Christie, though, that they recoil at the thought of nominating him to be the party’s next presidential nominee. Paul, they reason, while not perfect, would be a preferable alternative to nominating yet another moderate destined to lose in a general election fight against (let’s just say it, likely Democratic nominee) former Secretary of State Hillary Clinton. While anecdotal historical evidence supports this conclusion, it ignores the specific value that Christie brings to the table. Most notably, his is the presidential candidacy that Democrats fear the most while Paul is arguably the Republican candidate Democrats would most like to run against.

If you took a snapshot of today’s Republican primary electorate, you would be forgiven for thinking that Christie could never win his party’s nomination for president. According to the results of a recent Pew poll, a full 30 percent of Republicans have a negative view of the outspoken New Jersey governor – stiffer opposition from his own party than Mitt Romney faced by this point in the 2012 election cycle. His willingness to compromise with his opponents and to undercut members of his own party when it suits him politically has done serious damage to his brand among conservatives. This makes Democrats very happy.

While some conservatives are embracing the young, vibrant, fresh-thinking, and forward-looking Paul, Democrats would much rather run against the junior senator from Kentucky than they would the governor of New Jersey.

By 2016, Christie will have a record as a reformer who has twice won election statewide in a sapphire blue state. His persistently stable approval rating presently hovers around 70 percent of likely voters. In his first term, Christie tackled and tamed the state’s intractable teachers and public sector unions – what’s more, he did not run roughshod over Democrats to accomplish these goals. He made them believe it was their idea in the first place. In contrast, GOP governors like Wisconsin’s Scott Walker or Ohio’s John Kasich attempted to enact union reforms via blunt force with varying degrees of success. Both emerged from those fights politically damaged.

Paul, by 2016, will have achieved a variety of legislative accomplishments and delivered some well-received speeches during his tenure in the upper chamber of Congress. He may even sponsor a bill or two which become celebrated law — a big maybe given the present occupant of the Oval Office — but his accomplishments will pale in comparison to Christie’s.

Further, the Democratic Party can run virtually the same campaign that they ran against Romney in 2012 against Paul in 2016, substituting the former Massachusetts governor’s personal ties to wealth with Paul’s ideological attachment to libertarianism. They will depict Paul’s as a form of “no-government conservatism” on steroids. His opposition to many aspects of how America prosecutes the war on terror – lent bipartisan legitimacy by virtue of their being utilized by both the Bush and Obama administrations – could also become a net negative in a general election. Paul’s mistrust of many aspects of U.S. defense policy may win over some traditionally Democratic young voters while ceding as many adults and seniors to the Democrats. His candidacy would have the added catastrophic effect of surrendering the issue of national security to Democrats for a generation or more.

Christie, meanwhile, can make the issue of national defense a net benefit for his campaign. Given the likelihood that the Republican primaries are going to be dominated by libertarian-leaning insurgent candidates, Christie – and the Republican Party as a whole – is going to be forced to embrace a non-interventionist posture and a more reformist policy relating to domestic intelligence gathering programs than the governor might be personally comfortable with. In not going over the libertarian cliff entirely, though, he neutralizes what could be a threat to the GOP’s dominance over senior voters by ceding the issue of a strong national defense to Clinton.

Speaking of the 2012 campaign, Paul’s baggage when it comes to his past embrace of a neo-confederate speechwriter is as potentially politically toxic in a general presidential election as his father’s questionable newsletters would have been. The Democrats and Clinton can use Paul’s checkered past relating to race issues to drive up minority turnout, cement the impression that the GOP as a whole is unfriendly to minorities, and further depress the white vote.

About the only effective attack that the Democrats will resort to during a hypothetical Christie/Hillary general election that can mirror the 2012 campaign in terms of pitting demographic groups against one another is Christie’s (ostensibly principled) opposition to changing the definition of marriage to include same-sex couples. Public opinion has been trending rapidly in favor of gay marriage and, by 2016, it is likely that Christie’s veto of a state law that would have legalized gay marriages in New Jersey will be problematic for his candidacy.

But how effective will Democrats’ attacks on Christie’s old fashioned views on marriage be in a general election? Less so than they would hope. Clinton has taken her share of hits from the Democratic base for embracing gay marriage rights later than anyone in the Obama administration. She came out in favor of gay marriage after Vice President Joe Biden, Obama, and even her husband, former President Bill Clinton. With few issues Democratic presidential candidates can use to cudgel Clinton during the primaries – and there will be Democratic primaries in 2016 – the issue of Clinton’s seemingly hesitant embrace of marriage equality will come up.

Will Clinton’s gay marriage troubles cancel out Christies? No, but they will muddy the water enough to mute the efficacy of the opposition’s attacks on Christie as being a backwards-thinking bigot.

In private, Democrats will concede what the early polls confirm: Christie is the candidate they fear most. Their best hope is that, between now and 2016, Republicans run Christie out of the party. Or, at least, out of the running to become their next presidential nominee. Judging by the conservative blogosphere’s reaction to the Paul-Christie kerfuffle this week, Democrats just may get their wish and another eight years in the White House.