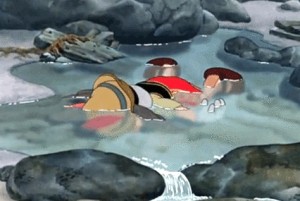 As Donald Trump‘s terrible week winds to a close, the mainstream media has picked up a counter-narrative that says Trump did Hillary Clinton a yuge favor by overshadowing the “gaffe” she committed last weekend when she told Fox News’ Chris Wallace that FBI Director James Comey backed up her version of the “Emailgate” story. Armed with a quartet of fictional marionette heads, Republicans fashioned the narrative into a talking point that even pro-Hillary media yappers didn’t bother to refute. The “fact-checkers” have spoken.

Except they’re wrong, every one of them, and they’re all, to some degree, lying in order to support their wrong conclusion. Mostly, they are committing a lie of omission, and so, for our more impatient readers, I will cut to the chase, on the condition that anyone who wants to argue the point with me on Twitter must read the whole thing first. The thing they are all leaving out of their various and sundry fact-checking exercises is this key exchange from FBI Director James Comey’s testimony before Congress:

“That would be a reasonable inference.”

All of the “Big Three” fact-checkers acknowledged the substance of the exchange to some degree, but either downplayed or outright lid about it. Politifact said Comey called the markings “insufficient,” when what he actually did was reply “no” when asked if any of the emails were “properly marked” as classified.

FactCheckDotOrg said Comey told that hearing that those emails “could have been missed by Clinton” when what he actually said was that a person who’s an “expert at what’s classified and what’s not classified” would reasonably infer “that those three documents were not classified.”

The Washington Post‘s fact-checker, the oft-quoted Glenn Kessler, made zero mention of the exchange, instead relying on this earlier exchange that Comey himself later contradicted:

The remark about Hillary Clinton’s lack of “sophistication” about classification got a lot of play in the media, but the fact is that he said just a few minutes later that an “expert at what’s classified and what’s not classified” would reasonably conclude the same thing that Hillary concluded.

So, the fact is that there were exactly zero emails sent or received by Hillary Clinton that were properly marked as classified. This is not some technicality, they were supposed to have big block letters at the top of every page, and they did not.

Now, it is fair for Hillary Clinton’s critics and opponents to point out that this explanation relies heavily on the question of what the definition of “classified” is, but for purposes of a “fact check,” matters of opinion are not supposed to enter into the equation. In order to evaluate Hillary’s truthfulness in a fair manner, it is necessary to evaluate what she said, what she meant when she said it, and what she believed when she said it. There’s a very good reason Comey wouldn’t say Hillary “lied” to the public, and told Congress that “I really don’t want to get in the business of trying to parse and judge her public statements,” because you have to ignore important context in order to conclude that this exchange proves that Hillary “lied”:

Gowdy: “Secretary Clinton said there was nothing marked classified on her emails either sent or received. Was that true?”

Comey: “There was classified material emailed.”

That clip was mentioned in all three “Fact Checks,” but all three omitted the “portion markings” part of the exchange from their transcripts. Comey was referring to the classification of the subject matter, not the documents themselves, and mentioning that inconvenient fact would mean having to explain that when Hillary Clinton said she had never sent or received any material marked classified, she had every reason to believe she was telling the truth, because she was. None of them were properly marked.

All the rest of it, while legitimate to discuss as a philosophical matter, is irrelevant to a fact-checking exercise, because there are vast differences of opinion about the material that wasn’t marked classified, but which people alternately assert should and should not have been. The only factually verifiable claim at issue is whether any of it was marked, and none of it was.

On Friday afternoon, Hillary addressed the “controversy,” and given the week’s political currents, was wise not to make a federal case over it, but the media should hold these fact-checkers to a higher standard.