How To Pass A Meaningful Assault Weapons Ban 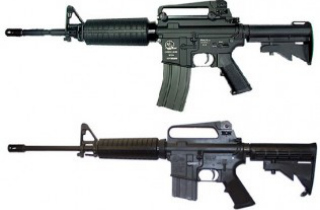 Vice President Joe Biden is set to deliver the full set of recommendations from his gun violence task force today, but already, there is a conventional wisdom thickening around the notion that a meaningful assault weapons ban will be impossible to pass, and might not even be worth trying. While the sheer number of anti-gun-regulation members of Congress is daunting, perhaps even frightening, there are several ways to change that math, and change it quickly.

Since then, there has been a lot of emphasis placed on background checks and high-capacity magazines, which are shaping up to be relatively easy lifts, but lots of wavering on an assault weapons ban, mostly based on the premise that there aren’t enough votes to pass one. It’s a convenient dodge that allows assault weapon apologists to kill the ban, without ever having to vote on it.

Despite the pushback, the President has continued to insist that an assault weapons ban will be part of the package he proposes, and if he remains steadfast, that insistence alone could well be enough to get it done. The horrific mass shooting at Sandy Hook Elementary School was a seismic event on the national conscience, and its effects on the policy debate over gun regulation aren’t really known yet. It’s one thing for Senate Majority Leader Harry Reid (who received $4,950.00 in donations from the NRA in his last Senate campaign) to say the votes aren’t there, but quite another for 51 Senators to actually vote against it, or for 41 Senators to filibuster it. At the time of the shooting, there were exactly 50 U.S. Senators who received an “A” rating from the NRA, including 10 Democrats, but it remains to be seen how many of them will cast their lot with the group now. That’s the first, easiest step toward passing a meaningful assault weapons ban: make them vote on it. Don’t believe Harry Reid.

The House of Representatives is a different story. In preparing this article, I compiled a chart that shows all of the House members’ NRA ratings, their respective states’ Brady Campaign scores, and their margins of victory in the 2012 election. From there, I added a whole bunch of other data that I’ll get into later, but if you sort the chart by party and margin of victory, you can see that there are 25 NRA “A”-rated Republicans who won their seats by 8 points or less, 11 of them by four points or less. There are 203 House members rated “B” or lower by the NRA, which means that flipping 14 “A”s, and whipping the “B”s, gets you to the 217 needed to pass an assault weapons ban.

Those 14 Reps, however, are tough nuts to crack. They didn’t care enough when one of their own colleagues was shot in the head, or when a 9 year-old girl was killed, or even when a Muslim terrorist came out in favor of lax gun regulations. It’s possible that, if the Senate passed such a bill, House Speaker John Boehner would be shamed into allowing a vote on it, and enough Republicans could peel off and pass it, but overwhelming public opinion hasn’t moved them before, and there’s no guarantee it will now.

What they do understand, though, is a show of force, the same force that keeps so many lawmakers in thrall to the National Rifle Association. There are a number of organizations that oppose the influence of the gun lobby, including The Brady Campaign To End Gun Violence, but the recently-formed Americans For Responsible Solutions, headed by former Rep. Gabby Giffords, has been getting a lot of attention. The group announced a fundraising goal of $20 million by 2014, but imagine if they reached that number in a matter of weeks, and maybe started spending some of it in those vulnerable districts. It’s not such a crazy idea. If Real Time host Bill Maher decided to contribute more than snarky tweets, and used that $5 million he put up to humiliate Donald Trump to actually stand up to the gun lobby, they’d be a quarter of the way there. If only a small handful of the celebrities who speak out about gun regulations kicked in, there would be an anti-NRA Death Star on the radar in no time. Imagine if, by the time Harry Reid tries to buy the NRA some more time, Gabby Giffords’ group has $40 million in its coffers, or Mayors Against Illegal Guns, or the Brady Campaign, or all three. Hell, Mike Bloomberg has that much in his couch cushions. How much is that “A” rating worth now?

The problems with previous assault weapons bans have been that they contained too many loopholes, have not been strict enough, and have been subject to lax grandfather clauses. Before you can pass a meaningful assault weapons ban, you have to write one, and Sen. Dianne Feinstein‘s ban fits the bill. It covers high-capacity magazines, semiautomatic assault rifles and some semiautomatic handguns, and, crucially, requires that all grandfathered weapons be registered and regulated the way machine guns are now.

The National Firearms Act was originally enacted as a response to Prohibition-era gangsters, and was used to effectively ban machine guns, among other things. The Supreme Court gutted the law in 1968, not because it infringed on the 2nd Amendment rights of law-abiding gun owners, but because it infringed on the 5th Amendment right of felons. The law was rewritten in 1968, and has been very effective at preventing machine gun crime, which is exceedingly rare. If, and only if, we treat banned assault weapons the same way, such a ban will be effective in ways that existing, or past, bans have not been.

Universal background checks and a ban on high-capacity magazines are not better than nothing, because if the measures that pass during this time of heightened energy turn out to be insufficient, that will hamper future efforts to pass responsible gun regulations. For some reason, the media treats the argument that the answer to ineffective laws is no laws as if that’s a legitimate “side” in this debate, which would spell doom if we ever had to reauthorize murder laws. In order for gun regulations to have a demonstrable effect, they must be comprehensive, and include a meaningful assault weapons ban (including high-capacity magazines and a tough grandfather clause), universal background checks, and a federal firearms registry. Like our three branches of government, if you take one of these away, the whole thing collapses.

In compiling the chart for this article, I kept adding data from various sources, on various subjects, just to see what it would look like. While much of the data belies clear conclusions, there are a few things that jumped out at me. First of all, the NRA is kicking the Brady Campaign’s ass. While most of the House is made up of NRA “A”-rated Representatives, there isn’t a single state that gets an “A” rating from the Brady Campaign, and Connecticut, the home of supposedly “strict” gun laws, clocks in at number 5… with a Brady score of 58, a high “F.”

Lest you think the Brady Campaign is just aiming too high, they score states on things like requiring gun owners to report stolen guns and involving law enforcement in the permit process, both of which top-rated California failed. It’s important to understand this, because many Americans think that gun laws are tougher than they actually are. One poll found that 70% of Americans think there is already a national firearms registry in the U.S., when there’s actually been a federal law against such a registry since 1986.

It’s also important because the decrepit state of gun regulations in the states defeats the Chicago argument that the gun lobby makes, that tough local gun laws don’t prevent gun violence. Trying to regulate guns at the local level is like trying to ban water from the middle of a bathtub. The state of Illinois, number nine on the Brady list with a score of 35, was below the national average in every category but one: gun murders. The people of Chicago (mostly the black people) are paying all of the freight for Illinois’ lax gun laws, and those of the surrounding states. If there were a national gun registry, and a requirement for background checks on private sales, how many straw purchasers of legal guns would turn around and sell them to criminals, knowing that the trail would lead back to them?

The next four Brady states, New Jersey, New York, Massachusetts, and Connecticut, are all at less than half of the national average for gun deaths, and those states surround Vermont (Brady score: 6), New Hampshire (Brady score: 6), and Maine (Brady score: 7), all of which fell below the national average for gun deaths. While not definitive, this does suggest that the (relatively) tougher gun laws in the Brady states are insulating those non-regulated states, while the lax gun laws in the states that surround California undercuts that state’s effort to reduce gun violence.

The parents of Sandy Hook Elementary School have declared that “things must change,” and although they have diplomatically refrained from pushing any one specific policy, they are owed more than Harry Reid, or some serious-voiced media figure, declaring that any such policy just can’t be done. They are owed a vote on all of them. Make them vote.