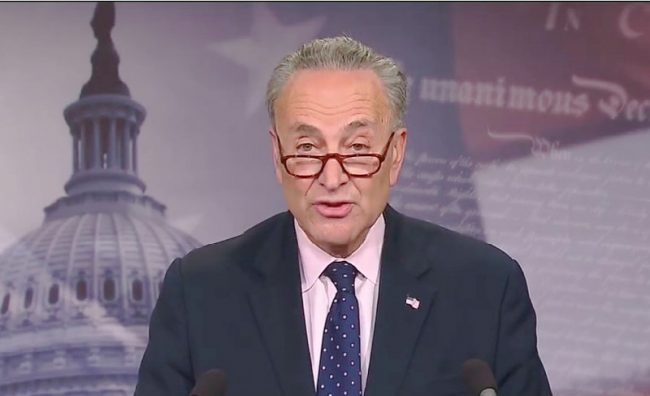 Essentially, all parties involved kicked the can down the road. And the early read on the deal is that Senate Minority Leader Chuck Schumer (D-NY) gave in to his counterpart, Senate Majority Leader Mitch McConnell (R-KY). (And to President Donald Trump, for that matter.)

Progressive Twitter was irate. Conservative Twitter was ecstatic. The one thing they agreed on, Chuck Schumer caved. Here’s a sampling of the social media reaction.

The D base is not happy: “It’s official: Chuck Schumer is the worst negotiator in Washington – even worse than Trump,” CREDO Political Director Murshed Zaheed https://t.co/OIwt6XxUEA

so, other than boosting Cap Lounge's business in the wee hours Saturday, what exactly did this shutdown accomplish?

I doubted it was possible, but Dems have actually lost a shutdown fight. Schumer has agreed to end the filibuster in exchange for practically nothing. Make no mistake: Schumer & Dems caved. What a political fiasco.

I lived long enough to see the Republicans actually win a government shutdown battle. With Trump in the White House no less.

Can someone clearly state what exactly Chuck Schumer extracted from McConnell by shutting down the government?

An inescapable fact: Democrats had a lot more to lose from this shutdown — politically speaking — than Republicans.

Why do anything to mess with a double-digit lead on the generic ballot?

Next time Schumer goes home to Brooklyn the protesters will be out in force.

This is a good example of the problem of bipartisanship.

In theory, it's a great thing.

In practice, the only thing it involves is ceding to Republican demands in exchange for nothing.

Does the GOP tax plan give Mitch McConnell an extra deduction for his ownership of Chuck Schumer?