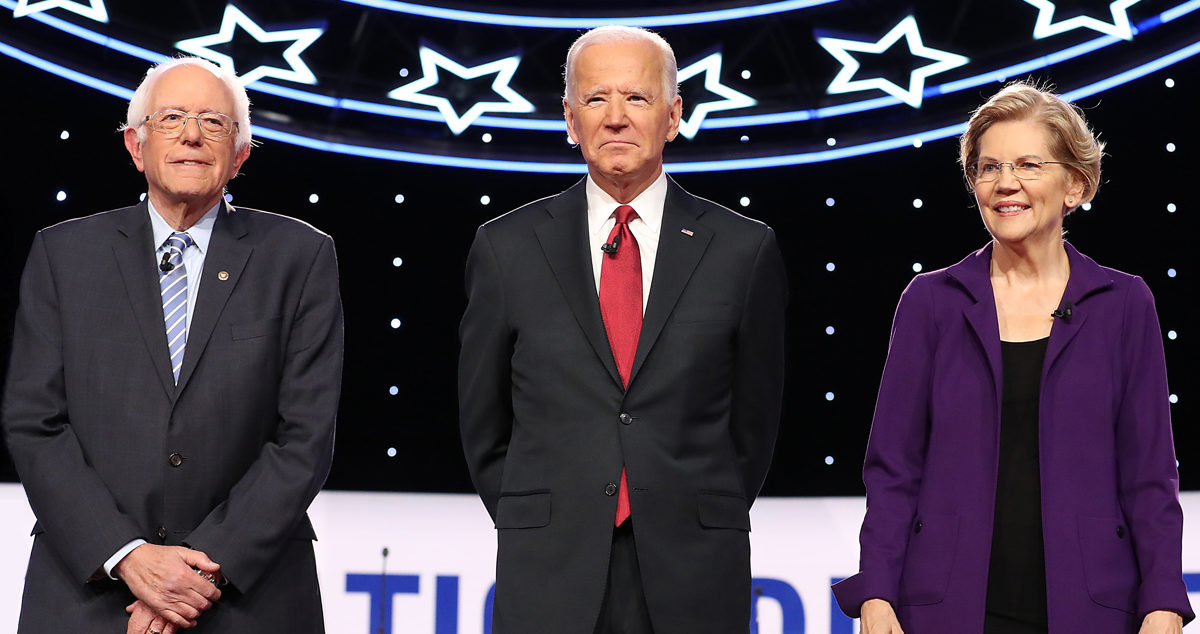 The state of play in the Democratic presidential primary campaign is undergoing a significant shift in the top tier, and while it’s tempting for campaigns to cherry-pick the polls with the best news, it’s far more useful to look at the bigger picture. The RealClearPolitics national polling average is one way to do that, and it shows a mixed bag for Biden, good news for Bernie, and bad news for Warren.

About three weeks ago, Warren briefly took the lead over Biden in the RCP average, at what appears to have been the zenith of her momentum. Since then, Warren has dropped more than five points in the average, while Biden has ticked up an eyelash.

And just a few days before Warren and Biden traded leads, Sanders was hospitalized for what we later learned was a heart attack. By the time Warren passed Biden, his numbers had sunk almost two-and-a-half points, but since then, he has rebounded to exactly where he was the day he was hospitalized.

What does all of this mean for the candidates?

For Warren, the slide in her momentum nationally is a flashing red light, and it’s difficult to attribute it to anything but the attacks she endured during the last debate over how she plans to fund her health care plan, and her subsequent promise to provide such a plan. There is now a lot riding on the release of that plan, which is still in the works. Upping the ante is the fact that while the media has generally been kind to Warren, they have been relentless on this issue.

The good news for Warren is that she has done very well in recent polls of Iowa and New Hampshire, and although she trails Biden by a greater margin than she did three weeks ago, the former veep has not added to his support. CNN’s recent New Hampshire poll — in which Warren took a 4-point lead over Biden — gave the media something to focus on instead of her national drop.

The former VP is more of a mixed bag. It’s good news that he hasn’t lost support in the last three weeks, feeding the durability narrative that has been built up around him. Biden has withstood months of attacks from rivals, and more recently, a relentless campaign of attacks from Trump. But that’s also the bad news.

Biden’s support ticked up following the debate, when he was landing body blows on Warren and Sanders over “Medicare for All,” but settled back in the last ten days or so. That could be an indication that Trump’s attack ads are having an impact and/or the coverage of the Biden campaign’s fundraising woes is shaking confidence in the former VP.

Warren’s loss of momentum is also a mixed bag for Biden, because while it should comfort him that she’s no longer nipping at his heels in the polls, that hasn’t translated to a shift in the narrative.

For Sanders, the news couldn’t be much better. After a dip following the heart attack, Bernie earned praise for his debate performance, and drew a large crowd for his comeback rally. And while both he and Warren have been getting attacked over the funding of Medicare for All, Sanders’ relative clarity on the issue may be giving him an edge over Warren there.

The question for him is whether he can build on that rebound, and whether the toes he’s dipped into “contrasting” with Warren will translate into more direct combat with his progressive rival.

Then there’s Mayor Pete, who took a lot of shots at more progressive rivals during the debate, and has generated excitement about his fundraising prowess. This could indicate an opening for him with supporters of the ideologically similar Biden. But like Warren and Sanders, even more so, Buttigieg hasn’t been able to make a dent in Biden’s dominance with black voters. It’s a mistake for any of them to assume that an early state victory alone will remedy that.

California Senator Kamala Harris has actually ticked up a tiny bit in the last three weeks, but Buttigieg’s rise has solidified her in the fifth spot. That’s not good news, nor is the fact that she’s had to lay off staff and redirect resources to Iowa. But the Harris campaign can take some comfort in the steadiness of her support despite relentlessly negative or nonexistent press.

Along with the activity above her in the polls, this presents an opening for Senator Harris. The vulnerability of the frontrunners — particularly Warren — and Mayor Pete’s trouble with black voters could set the stage for a big move by Harris at the next debate.

The same can be said for the lower tier of candidates, whose main mission in life is to qualify for the next debate in November. Senators Amy Klobuchar and Cory Booker, as well as Andrew Yang and Tom Steyer, have already met the criteria. Former Congressman Beto O’Rourke, former HUD Secretary Julian Castro, and Congresswoman Tulsi Gabbard are still short.

It is still very early in this process, as history has shown, but candidates can ill afford to ignore what the polls are telling them.