Janet Napolitano May Have Been Right…And Other Flight 253 Truths

Janet Napolitano May Have Been Right…And Other Flight 253 Truths 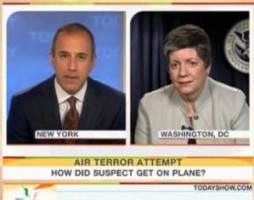 Secretary of Homeland Security Janet Napolitano may have given conservatives a great new t-shirt idea yesterday by claiming that the system “worked like clockwork” once the flight 253 incident had occurred (a disclaimer that rendered the statement meaningless), but there may actually be some truth to the notion that the system worked.

While Napolitano’s statement (since “clarified”) was clearly a wrongheaded attempt to reassure people by understating the danger, it seems to me that a whole bunch of other people have an interest in making you as scared as possible.

Case in point: Dueling headlines that say, alternately, that the substance used in the device, PETN, is “Common And Easily Detectable,(AP via HuffPo)” or is “hard to detect and just 100g can destroy a car.(UK Times)” That’s an awful lot of wiggle room.

The AP’s claim that PETN is easily detectable proceeds from some pretty big assumptions, notably the use of a “Puffer” machine:

Airport “puffer” machines – the devices that blow air onto a passenger to collect and analyze residues – would probably have detected the powder, as would bomb-sniffing dogs or a hands-on search using a swab.

Aside from the fact that there’s a decent chance the suspect didn’t have any PETN residue on him for the machines to detect, the TSA scrapped the puffer program earlier this year after very early indications that the $160,000 machines just didn’t work: (from June 2007)

Both machines have been plagued by false alarms and an inability to reset properly, according to a TSA supervisor, who said repairs made earlier this year have not helped.

“We all laugh about it now because we never know if it’s working or not,” said the supervisor, who spoke only on condition of anonymity because the individual was not authorized to discuss TSA issues.

Using a $160,000 machine that doesn’t work, while also swabbing and dog-sniffing every passenger, doesn’t really fit the “easy” bill.

The AP article also references full body scanners, whose first permanent installation was, ironically, in Amsterdam. Their expert doesn’t factor in the fact that the full body scanner is only used in situations that would otherwise require a hand-frisking. Since Abdul Farouk Abdulmutallab wasn’t on the “selectee” list, or otherwise selected for additional screening, the use of the body scanner is somewhat moot.

The body scanners have been controversial from a privacy standpoint, but more than that, in order to be completely certain, you would have to install them at every single checkpoint in every airport in the world. At $170,000 a pop, versus about $5,000 for a metal detector, the cost would be astronomical. That would be fine with the machine’s manufacturers, I’m sure:


>>> NEXT PAGE: A Security expert reveals how these security systems are sort of a waste of time.