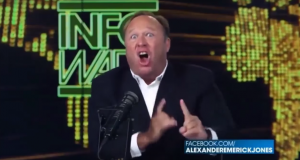 In news that will make the hair on the back of your human-animal hybrid stand up, noted death battler and conspiracy theorist Alex Jones is being accused of selling supplements tainted with “potentially dangerous levels” of lead.

This potentially damning finding comes from a new report by Newsweek detailing how the CEH (Center for Environmental Health) recently filed a claim against Jones and InfoWars.

In particular, the dangerous heavy metal was found in some of Jones’ signature supplements—the InfoWars “Caveman Paleo Formula” and the InfoWars “Myco-ZX.”

At the time of the article’s posting, InfoWars has not responded to request for comment from Newsweek.