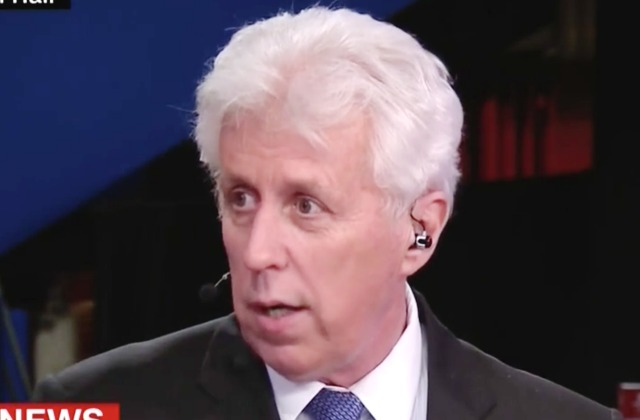 When you look at that tweet, I’m sure your initial reaction was either shock, confusion, or even anger. And I wouldn’t blame you.

Many who already hate Lord for being CNN’s most vocal defender of President Donald Trump already see him as a Nazi, so when they saw that tweet, it only fed into their preconceived notions.

But what if there was context to that tweet that they or you weren’t aware of? What if Jeffrey Lord isn’t actually a Nazi?

That’s because there is context to the tweet and Jeffrey Lord isn’t a Nazi.

On Wednesday, Lord wrote this article published at the conservative magazine The American Spectator that went after the liberal organization Media Matters For America for targeting Fox News host Sean Hannity and launching a campaign to get his show cancelled. Using the method that got Bill O’Reilly fired, MMFA attempted to pressure Hannity’s sponsors to pull their ads from his program. Clearly their efforts failed as Hannity is still on television every weeknight.

In the piece, Lord referred to the organization as “fascist Media Matters” because in his opinion, they were trying to stomp on Hannity’s First Amendment right of free speech. He even accuses them of “rewriting” the First Amendment by replacing it with the following satire he authored:

The United States Ministry of Popular Culture shall make all laws respecting the exercise of speech; abridging speech as judged necessary by or in the press. All sponsors of speech-related television and radio shows, Internet sites and publications of any kind must seek approval from the Ministry or lose their right to speak in America.

He adds, “The American Spectator has been unable to confirm reports that the original draft of this Media Matters revision ended with the words: ‘Sieg Heil!‘”

Would you look at that? I think we found the contextual origin to Lord’s controversial tweet!

MMFA President Angelo Carusone took offense to Lord’s article, particularly to the allegation that his origination is funded by progressive billionaire George Soros.

Carusone and Lord had this feisty Twitter exchange on Wednesday:

Hey Jeff. Article is bullshit and filled with lies. Soros gave us one donation one time…in 2010.

Why are you lying to your readers?

So you gave it back?

What are you talking about? One donation, one time. How does that have anything to do with now?

You and your pals lie. You claim we’re basically being bankrolled by a single donor. It’s just demonstrably false. Won’t stop you though.

Crickets here, huh? Predictable. And you’ll go on to keep parroting this lie too, I bet. Because hey. Why not. Nothing matters apparently.

On Thursday morning, Lord followed up his initial article with an article about Carusone’s reaction, which included their heated Twitter exchange.

And again, Carusone went after him on Twitter, this time for spelling his name wrong in the headline.

Your headline has a mistake in it. Why do you expect anyone to take you seriously when you don’t take yourself seriously.

And this is how Lord responded:

So as you can see, Lord was mocking what he deemed to be the “fascist” Media Matters president by invoking a line he used in his initial article attacking the organization. That was the context.

Sadly for him, many on Twitter and his employer CNN either did not understand the context or didn’t even care because Lord was fired within hours of sending that tweet.

It’s easy to understand why Lord was fired. He literally tweeted a Nazi chant. Yes, he tweeted it as a joke, but he still tweeted a Nazi chant! In this day and age of heightened sensitivity and political correctness (particularly on social media), social justice warriors are always ready with their pitchforks and torches waiting for something to be outraged about like junkies on street corners waiting for their next fix. In the modern era, it is dangerous to make a politically incorrect joke and Lord of all people should have known that. After all, his job was to defend the most politically incorrect president our country has ever had from his colleagues who always expressed over-the-top hysteria towards this presidency.

We now live in a society where knee-jerk reactions dictate what isn’t culturally acceptable instead of using logic, reason, and understanding. If CNN had any understanding, they would have known that Lord was completely joking when he made that tweet and he didn’t mean anyone harm. His tweet was a bad attempt at trolling the Media Matters president and nothing more. What I find hysterical is that it took just three hours for CNN to fire Lord over this but took nearly 24 hours for them to fire Kathy Griffin for holding a bloodied severed head of our president like an ISIS terrorist.

But perhaps there’s a silver lining here for Jeffrey Lord in that he no longer has to work for that network.

For over two years, Lord was the Trump-supporting punching bag for CNN. During the election, Lord was usually the one person who would defend the Republican candidate against an eight-person panel and a moderator who often appeared to loathe him. Lord arguably had the toughest job at that network because he would defend Trump on anything.

Would I say Lord did a good job at defending Trump? Eh, let’s just say there are plenty of people at Fox News who can do better. That being said, what Lord had to say was always a breath of fresh air on a network that according to a Harvard study dedicates 93% of its coverage negatively towards the president.

Lord was always the underdog, but even when he himself was in the wrong for defending Trump, he was always polite, courteous, and respectful to his colleagues who rarely did the same in return. Now just imagine being yelled at on a daily basis by the likes of Ana Navarro, Van Jones, Angela Rye, and Symone Sanders or being lectured by Chris Cuomo or Don Lemon. Heck, Anderson Cooper, who we’re told is an unbiased professional, mocked Lord by saying that he would defend Trump if he “took a dump on his desk.” Liberal pundits at Fox News are treated better. As carried away as Trump supporters get on that network, they would never resort to belittling their left-leaning colleagues and attacking their integrities like Lord experienced at CNN.

At any rate, Lord was forced to walk the plank off the Titanic. As Sebastian Gorka has reminded the network time and time again, CNN ranked 13th among cable networks, falling below Nick-at-Nite reruns. And now that CNN has lost two of their most staunch Trump supporters (Kayleigh McEnany has joined the RNC) in less than a week, they will be hard pressed to even pretend that they give balanced coverage.

It is uncertain what Lord’s next chapter will look like, but no matter what he’ll be better off. Because in the end, he was unjustly fired by a network that treated him like crap. And if I were him, I’d say good riddance.